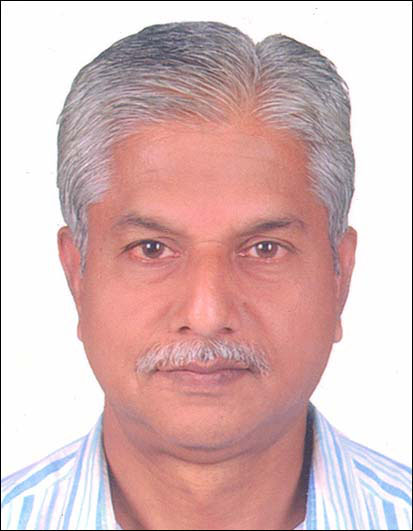 Dr. Ashok T Chakravarthy, a prolific poet and review writer, Telangana State, India,has been composing poetry for over 25 years. As of now, of the 2000 poems composed, nearly 1500 poems appeared in various magazines, journals, anthologies, newspapers, e-zines etc. in nearly 100 countries across the world. His six volumes of poetry viz., Charismata of Poesie, The Chariot of Musings, Serene Thoughts, Twinkles, Reflections and Altitudes received wide readership acclaim all over the world. To know more, go to : http://peacefromharmony.org/?cat=en_c&key=286

Ashok’s poetry is aimed at promoting universal peace, environment awareness, protection of children rights etc. He was commended with several prestigious international awards, viz., Universal Peace Ambassador, International Intellectual Peace Award, Asian Who’s Who, Effulgent Star etc. He was conferred with the FOUR prestigious doctorates, viz., Doctor of Literature (2), Doctor of Letters (Honoris Causa), Doctor of Humanities and honored with ‘First Laureate of the World of Literature 2017’, on the 26th anniversary of Independence of KAZAKHSTAN by the World Nations Writers’ Union.‎ That apart, Mr. Ashok is nominated as Hon’ Adviser of Borneo International Open University, Malaysia, Vice-President, Global Harmony Association, Russia, Research Committee Member, U.S.A, Centre of Non-killing, Norway are a few of the rare international recognitions among several others he acquired.

Everyone aspires to tread the path of success,

Also aspire to tread a path for acquiring riches;

Caught in the web of never-ending desire’s rift

To tread the untrodden paths of youthfulness;

Unaware; youth is just a fleeting phase of life

In fact, every curve of a ‘passing life phase’

Unfolds something ever-new, to disclose thus,

A hidden scope for world-conscious attainment

Childhood to youth and middle age to old-age

We guess, we treaded new paths at every stage;

But, when self-realization really dawns in heart

We realize; real path of life is not walked as yet.

Thoughts, when I try to jot down

Try to escape my scribbling pen;

They try to fly, fly and fly far away

Into the horizon; but there’s no way.

As the dusk gradually unfolds

They fly back into thought’s fold;

In the nest of my heart’s heart

I preserve them with love utmost.

A volume in my mind’s chambers

Often scribbles without any blunders;

I sing praises on beautiful nature

The seashells reverberate at dusk fall

As if blessing me with blissful windfall.

While clouds adorn the firmament

While dusk surrounds with twilight;

Yet another hail of thought’s dream

Seep Into the layers of mind’s volume.

Oh Earth and nature! Both are so very beautiful

To every living being they give a view, delightful;

But, of what mind-set the worldly beings are?

The essential life-givers, if they intently ignore.

Your beautiful heart indeed is a confined book;

You starve and deeply thirst for a humane hug

Wonder, is the world wrapped with a cruel rug.

Oh war craving rebels ! Of what use a living is

If innocents razed to death, instead of offering bliss;

Saving a life, is akin to conferring a new lease of life

Will it not please the heart if you share others grief.

Of what use is piling of disastrous nuclear weapons

Is it not a grave threat to own soil and co-humans;

Living beings are beautiful, the world will be beautiful

If we share peace and concern with a heart, dutiful?

If we open our heart with a true sense of righteousness

If we honestly apply the ‘discriminate power’ within us;

The present and future, shall be beautiful and peaceful.

(22nd APRIL – A Poem to commemorate

In balancing the vital role of life on this lovely planet

The oceans play an essential role; ignoring this fact;

Why have we been constantly destructing marine life

That apart, clogging the waste streams and landfills

We are endorsing a future, perilous and disgraceful;

Plastic debris, not only to the marine species is harmful,

The highly toxic chemicals not only pollute water contents

But pollutes air and cause various environmental effects;

Let us not be culprits in the eyes of future generations

For, we have to take a lead in curtailing this devastation.

It’s high time, let’s come out of the stupor of selfishness

It’s high time, let’s come out of the stupor of senselessness

Pledging to guard planet earth from threats of plastic debris

Why not we aspire to see all living beings in a state of bliss.

A world where ‘Nature’ bestowed us with a serene life

At our own will, we humans are inviting ruin and strife;

Only then, “YOU and I” can dispel the plastic debris threat.