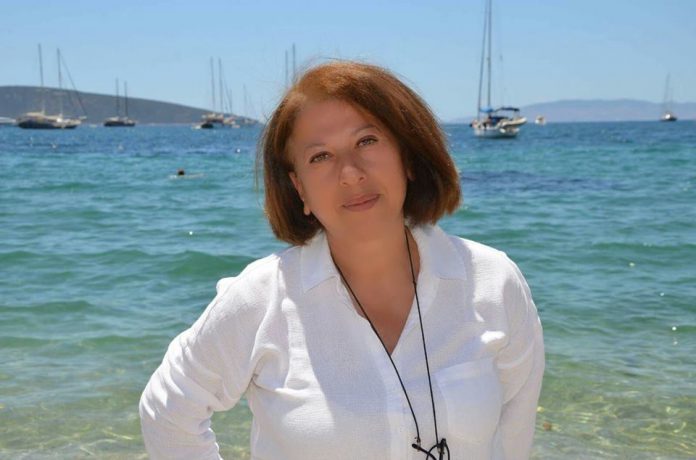 Her interest and love for poetry and literature began in her middle school years.

She completed her certificate programs related to her profession in Turkey and Canada.

She worked in Istanbul as an IATA agent and foreign trade company owner for 15 years and she moved to Canada. She worked at İnternational Logistic company and lived there for 12 years. After returning to Turkey, she started to publish her works.

Has a daughter named Nazli.

One half is half done / Artshop Publishing/ 2017-İstanbul-Turkey

The road was ending / Kaynak Publishing/2014-İstanbul-Turkey

Pain of the Earth/ Artshop Publishing/2018-İstanbul-Turkey

Serpil Devrim has won the Muammer Hacıoğlu Literary Award for her book One Half is Half Done in April 2018.

In her poetry, she focuses on social issues, inspired by real life. She also writes love poems, socialist and lyric lines. Her poems, her novel and her stories are racial, violence and war against and she read her poems in diffferent radio and television channels and shared her humanist views with listeners and viewers.

Many of her poems and short stories were published in different literature magazines in Turkey.Some of these magazines are: Kasabadan Esinti, Menekşe, Bodrum Gündem, Berfin Bahar, Adalya, Tmolos Edebiyat, Aratos, Lacivert and Mühür.

She has taken place at many different international poetry festivals such as : Feminİstanbul, Bodrum Bineali and Kalimerhaba.

She is involved with many charities and works with disabled and homeless children.

She lives in Bodrum.

She is a member of the PEN İnternational Writers Associatıon in Turkey.

my eyes sculpted what outweighed them

the crowd of my outside, the isolation of my inside

sculpted gently the side of me that was offended by life

i took it to the city square and left it there

i’m too lonely for anyone to notice me

my semi-skilled working, my bronze age,

the slip-of-tongue wing of whirligig

my iron age is my mastership, by inner beauty that attracts the devil

i sculpted what outweighed my tongue

seven generations, seven shirts off of the back of the stone

i spilled from my skirt ash-colored and rose-scented

i took my heart out and loaded my emotional clamorous side

onto the hands of a callow off-tune musician

i sculpted the earth to cleanse it of its dirt

blew its whistle its vigorous siren

quite appropriate for a tale, quite against the genuine

put her seamy lustful foot down

two acrobats on one tightrope, impatient and fond of comfort,

the one heavily seethed the one whose face is down

i eroded the surface, took it out, slam it down

my flesh blood and memory thought

it wouldn’t be heard when slammed

the joy of cleansing gleamed on the cutter

i sculpted my heart, open wounds around it apparent

people passed by, passed away, hunger hasn’t had enough yet

the dead poet is a river exiled from its bed

its gurgle is without foot or rhyme

its flow is the linear of existence

the path it knows is courageous and open

water takes the form of the container

dress the form of the body in it

and the chewn bits the form of the mouth

the bed of the poet for the outbursts

its two sides are the song of goats

and a lyric poem blessed with immortality

on the land of the dead

the river exiled from its bed

it brings down stars from the sky

and bathes in its own water

it’s hilly and rocky when seen from the sea

when seen from the land there are crazy blue waves only

with their hard-line freedom

it sweeps before itself the ways

and the aid sailors seek

it grows out of the labors

of workers and splitters

and lies next to dead children

decapitated at each war

it had sad eyes at each break up

it gurgles to death

with fragile loves at its core

“my soul was a door handle

as my mind never matched the steps”

who lands down on the cage of my chest fluttering

your face is the gap called wound this evening

your eyes were a single country, the whole earth

the insensitivity of this era is a death trap

the thundering robbery, plunder, pillage of an avalanche

with its cooperative loam the red-brown marsh

depth and the subsiding weight do go away

lacking humanity that makes it lose its way

it has no roof to wash ashore or to take shelter

in september the unhugged body the surplus of water

the iceberg drifting from where it belongs is just like you

woven for the outer world a long time ago

its fragile body lessens by moments, from which

it adds itself to the water that will drown us all

wherever i turn the speed of light is the same

which pours down on the sift of the sky

from a long distance