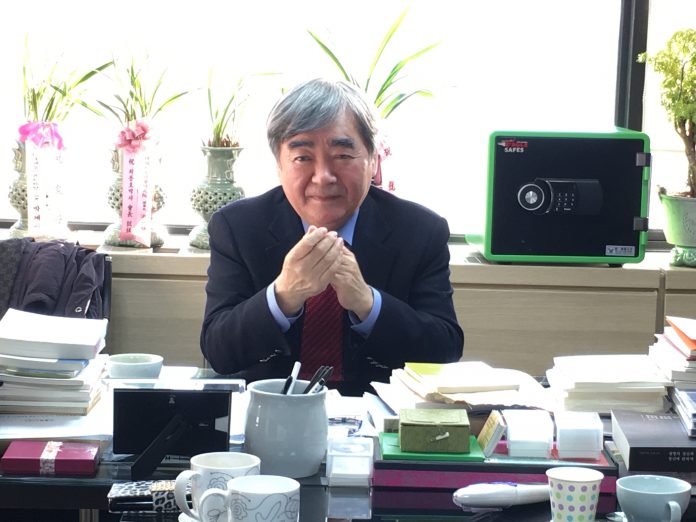 He was Dean of Graduate School, Korea Univ. and Visiting Scholar at UCLA, Waseda Univ. and Iowa Univ.

He is the Councilor of the Society of Korean Poets the Editor of Lyric Poetry and Poetics (Quarterly), Chair of Changwon KC International Literary Prize and member of Managing Committee of Hoam Award.

As a poet, he produced a considerable body of literary works including Wind of Yellow Sand, A Morning Desk, Where is the Woodpecker Hidden, Dharma Plays Ball and Korean Jewel Beetle in Blaze, A Face of Ice and A Monarch Butterfly.

As an international poet, his poetry books including Trees Wet with Rain (English)            Korean Buddhist Poems (English) and МОРЕ В БУТЬⅠΛКЕ (Russian) have been translated into as many languages as in Chinese, Japanese, Mongolian and French.

As a scholar of Korean literature, he produced a lot of books of theory of poetry including The History of the Spirit in Modern Poetry, Digital Culture and Ecological Poetics, Poetic Incantation of Mud Paradise and Chung Ji Yong’s Poetry and Archeology of Criticism.

–A Word of an Old Master in Seorak Mountain

Once drawn from the sheath, it is not a sword, but a knife.
No sword is more excellent than to keep its worn-out sheath.
When brandishing its sharp blade toward the world, the spirit of the sword becomes rusty, eventually nothing more than a piece of iron with black blood.

A sword does not exist to kill life. It exists to stop killing and disorder of the world. When brandished rashly, its sharpness does an injury to people.

The sword, when still kept in its worn-out sheath, has the power enough to move the heart of man and the world, and finally to have the greatest mountain shed tears. Only he who realizes it truly knows how to use it without waving it. He does not need it. It is because he lives a life with it not to brandish it rashly.

This is what the old teacher wants to say to whoever seeks a sharp sword:
Go toward the way of an excellent sword, not the way of the world.
The sword, still kept within its worn-out sheath has the power enough to move the heart of man and the world, and even to have the greatest mountain shed tears.

Kafka
who was lost in the fog and never got into the castle to the end
one day in the morning
saw
the ugly sight of him who turned into a worm.

Changzu
who knew what heaven is doing,
became a butterfly in a day
beating its wings. He never knew whether the butterfly
in his dream was he or the dreamer was he.

A worm turns into a butterfly;
a butterfly a worm:
Sakayamuni
realized that life coming out of the void
is a long, long illusion not bearing the true self.

I take a glance at old mother.
Where the clean, fair face is:
once the soft footstep
is now hard to move.

It’s a sad thing, living
with a love they can’t cope with loaded on their heads.
A rich smell
of shrimp oil stored in their heads
drifts far out to sea borne on the wind
and being unable to avoid the greed of men with harpoons
is their ultimate fate.
Rock carvings where prehistoric catchalots still live–
there’s no knowing with what kind of heart ancient folk,
who used to offer sacrifices fervently with dancing shamans,
carved them on the black, hard rock,
but clearly they too must have known
the sorrowful legends those tribes possessed
that slept with one eye open, heads filled with perfumed oil.

The prehistoric folk who as they offered sacrifices to their gods
played flutes made from the long teeth of catchalots
that transmitted faint signals from the distant north
borne on the waves,
their lives like catchalots meeting their death
after seeking their far-off loves
on hearing a whistling sound

Loving as they vanquish the world’s waves, and though wounded
still obliged to live on for the sake of their kids
in order to celebrate this world’s banquets
they carved the shape of whales carrying their babies in rock
then mourning those deaths
they surely sang the grief they offered to god.

The sorrow of humans experiencing an age without love,
like catchalots threatened with extinction
though hard to achieve love’s longing
fill the heart,
though harpoons of injustice come flying, pierce their skin,
they plow on through the waves,
and in order to bravely welcome their fate
they are obliged to live fleeting moments like eternity.

The sound of a monk’s wooden gong
blown along on a daybreak breeze.

Raindrops striking the yard like a drum
and breaking their necks.

Once school’s over, my book-bag.

From inside the lunch-box the spoon’s clatter keeping me company.

The tortuous path along rice-field embankments the puppy’s tail raced along,

The earth’s smell, spring water flooding in, echoing the breathing of the banks.