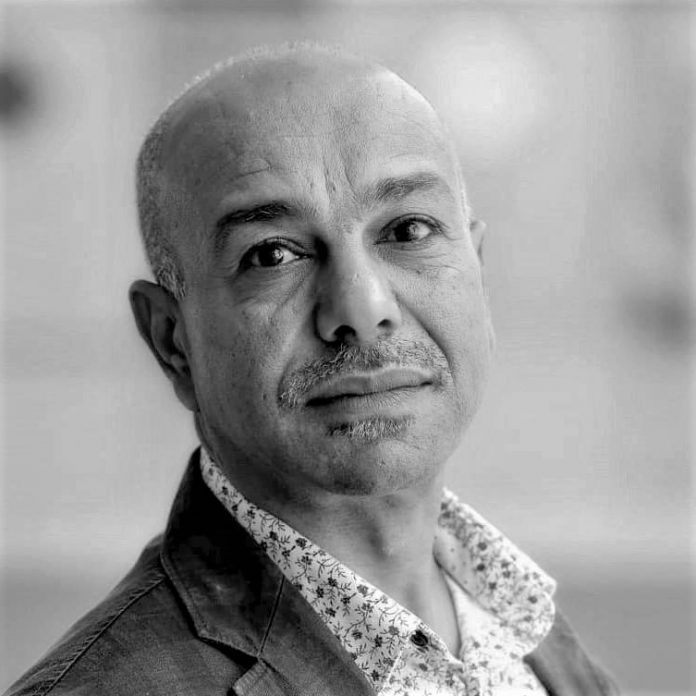 Jordanian poet and painter of Palestinian origin. Born in a village called Waqqas; lived his childhood in a neighboring village called Qulaiat in Jordan Valley. He watched the mountains of Palestine from his land of birth, as his family was deported from the city of Beisan in the historical northern Palestine in 1948 by the Israeli occupation.

He studied journalism and Arabic Literature. Recentlyhe is the Editorial Manager of Publisher Weekly,Arabic edition of PW magazine, published by Sharjah Book Authority in UAE. He was the head of the cultural section at “Al Arab Al Youm” Jordanian newspaper, and then moved to the “AlKhaleej” daily newspaper in Sharjah, UAE. He was the head of the culture and arts section at “Emarat Al Youm” daily newspaper in Dubai for 11 years.

Ali Al Ameri comes from a creative family of poets and artists, “a family possessed with arts” as he likes to define it.

“These are my Intuitions..  This is my Vague Hand”, “White Eclipse”, and

He participated in several group art exhibitions, since 1985 in UAE, Kuwait, Egypt, Macedonia, Palestine, Romania and U.S.A. His first art exhibition was in Amman, Jordan 2015. The Palestinian artist Ismail Shammout Mentioned to Al Ameri in his book “Art in Palestine”, Kuwait 1989.  He participated at international art symposiums in Greece, Macedonia, Georgia, Romania, Jordan, UAE and Egypt.

He was the founder and Art Director of Dubai International Art Symposium (DIAS).

from above the branches.

It winds shadows around its hands.

on the nail of the past,

where clouds drop a stony title,

from the top of the blue to Friday.

I saw and so did the lilac.

I saw a shepherdess pouring

into the lyre a day

and a silvered paradise and singing.

But darkness remained in the bird’s neck,

At the farthest end of the world.

Fool of the Hill, drying the light on the neighbors’ clothesline, and writes whatever the shadows dictates. Dripping a song in the Wadi Zeqlab, escorting lemon trees, telling them about a war that burned the souls of all green and dry.

by a blind pilot

in its greener form

The mud flew, the river flew, the Cypress trees flew, the field flew, the month of May flew, a shirt with a hole on the chest flew and a Lark flies from a Cider tree guarding a grave on top of the hill near Jordan River.

Fool of the Hill, talking to trees,

Drawing with coal on white walls faces of harvesters, scythes shining among golden tufts, kids on wooden boards and horses pulling the lines of summer.

among Clay houses, drawing with coal, portraits of girls filling the morning light in tin buckets, and form tiaras from wild mint leaves. Their giggles echoing in the small streets while swaying slowly like Pomegranate trees. Gently coming back to their village “Qulaiat”, pouring nostalgia to their first houses in “Beisan”.

Fool of the Hill talking to a tied shadow on a canal, stuffing clouds inside the cracks of stone. He ties a thread around the unknown and walks away like a desolated light.

“Beisan” is here, with a shawl of fields on her shoulders. Here is “Wadi  Al Esha”. The plow line is here, and flower of bitter orange lighting the absent and the written. “Qulaiat” is here listening to the flirting of fire. A green shrine stands in “Waqqas” Village. The cloak of my grandfather Ibrahim is here with plucks of tears of light and a horse in the yard, while chamomile blooms on clay roofs.

Fool of the Hill muttering the secret names of eternity, the first names of a desolated address and the redacted names on a scroll.

on an engraved stone

an earthquake toying with the erased and threads

the feather of a cock in the drag of Friday

Fool of the Hill escorting lemon trees, telling them about a war and trenches, about kids running under death, about the history of fire and a cave dreaming of flying.

goes to the desolated cave

the image of a Fool

on the deprivation stone.

Do the stars sleep like letters in time’s box?

Do they slide in the evening?

Do they open like lovers’ words in the house’s shade?

Do the stars meet like the lines of palms?

Do they embrace quickly:

two rivers after a long voyage?

And do they change places, as spirits between night and clouds? Do they compete up there, as pupils compete to draw their teacher’s face? And do the stars gaze at their faces in mirrors of mist, as women in love stand before mirrors drawing kohl for their rendezvous?

I have seen the Milky Way

and I have seen

Eden above the bed.

My Heart Hosts You

My heart hosts you,

you bring enchantment to the stone of oblivion;

spread a turquoise carpet between my instincts.

Your voice is sweet basil’s fragrance on my bed,

the hearth is to my west

and lightning continues its high song.

so clouds are joyful on the terrace;

the line of love is dazzled by your light.

I embrace you until water trembles.

My heart hosts your secret crescents

The etching on your silver necklace flowers

I embrace you until the water shakes.

A Woman from east of the heart,

grinding wheat on a stone,

singing for a lightning flowing between the music.

A Woman in a lunar house,

embossing lines of henna in the door,

igniting a wood of incense under the unseen,

and opens the secret of meaning.

A Woman swaying in front of the mirror.

At midnight, traveling to her first paradise.

Over the silk of the fire, butterflies hovering.

The woman pouring a light into the clay,

and drawing two lines on the path.

A Woman from east of the spirit,

anointing a blue pebble with oblivion,

and walking towards the remembrance.

A Woman from the heart of east,

lighting love before the arches.

In her ring the sapphire stone blossoms.

And when the shadow bends over a language,