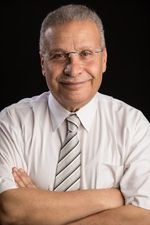 George Onsy (b. 1953) is an Egyptian thinker, poet, artist, and Professor of English and Art-architecture History at The Egyptian-Russian University, Cairo, as well as other academies. His outstanding works of poetry and art calling for a universal unifying spirituality have been published in his books: VOICES FROM ETERNITY-India 2014, LET’S BE ONE IN THE ONE-India 2017 (Amazon), and WITH OSCAR WILD (Bookemon), as well as in many international anthologies, magazines, e-zines, and TV interviews. He is a recipient of several awards notably “The Global Icon of Peace Award”-2017 and “The Most Outstanding Peace Poet-2017” – 2018 (Nigeria) and “The Best Poet Award”-2017 (World Nation Writers Union, Kazakhstan), UME-Latina America.

Reaching out to the world in 6 international languages, George Onsy is the Founder-President of the international peacemaking association RINASCIMENTO-RENAISSANCE Millennium III – RRMIII and has been lately nominated by many thinkers, writers and conference organizers round the world for Nobel Prize.

(This part can be added if there’s still space)

Many of George’s poems have been published in more than 60 international anthologies and featured in poetry magazines and broadcast in different countries. His works have also been translated into different international languages like Telugu, Odia, for India as well as Chinese, Greek, Italian, Spanish. He himself also writes poetry, in Arabic, French, Spanish, Italian, German and Russian beside English.

Every time you go around

No shouts of joy but

Moans an’ cries will sound.

Haven’t you got dizzy, busy

From your fields and trees?

Every time you spin

Where none will ever win.

Offering yourself to those

Every time you revolve

They never want to solve.

Haven’t you been steady, ready

With the wisdom of survival

For those who have become

So violent, so suicidal?

Everyone owes and fears!

The green we denuded

You from, dear mum,

With floods of tears.

To start dancing instead,

Roll with our dreams

Where we’ll escort you

With your countless flowers!

We’ll breathe out an’ spread

Through the whole universe

To echo the resurrection hymn

To all the generations

Of Multiculturalism and Human Solidarity

I have one tongue

My joys and sorrows

I have one skin

I have one heart

Of likes and dislikes

Of faith and doubt

I have one mind

That tries to tell me

It’s Our ONE God’s Grace

On the Refugees’ Crisis and Europe’s Future

TO EUROPE WITH LOVE– 2

Have you ever his two sons known?

If you don’t know let me tell you:

One is FRANCE’s Marat

The other GERMANY’s Goethe

Both … both with their father

The first, the Revolution’s martyr,

The second, for challenging

Through his ‘Faust’ all devil’s pacts

Some think that Trojan Horse

Is galloping over the abyss between

Oh, if only ENGLAND’s Shakespeare

Had sketched in his plays any leader,

Somewhere between his retired King Lear

But as both are now powerless penniless

In the playwright’s inky graveyard,

Some may think that foreseeing

Is not that hard

Between his ‘Inferno’ and ‘Paradiso’:

Have you mentioned in your ‘Comedia’

A thousand and one Troys

Is condemned for being too wise?

Some would ask: But should Trojan Horse

Always be of such a massive size?

But at Dante’s Paradise,

Who had once been trodden

By past horses wild

Has been always there

Ready to send his Don Quixote

Who has taught the whole world

How we should be ridiculous in order

To secure our crazy dreams

Thus, he finds no shame to ride

For whatever its bowels would bring

Remember all parties, all factions,

All unions, all camps, all sects

That the past plaguing horse

Had no rider, no spur, no bridle

Today, to keep peace alive, we should say:

Where there’s a horse there is a horseman.

That what I’ve guessed, dear Europe,

From your Renaissance heroes’ works,

And that what a coming-soon Renaissance

Of no arms but only banners white

Will bloodlessly put into action

So, let’s wait for the Prophetic Knight!

With my artwork combining our RRM3’s Logo, my painting in the background (THE INDIAN WHEEL OF EXISTENCE IN DIALOGUE WITH THE TEMPLE OF ATHENS FRIEZE’S FIGURES-2015), and a selection of world paintings and sculptures to depict the poem’s theme and elements.